To increase awareness among mall-goers on how to be responsible rice consumers, an event dubbed as “CelebRICE: RICEponsable AKO Fair!” was spearheaded by the Department of Agriculture (DA) held at Trinoma Activity Center, Quezon City recently.

Hosted by DA’s Philippine Rice Research Institute (PhilRice), the event is aligned with the celebration of 2013 as the National Year of Rice (NYR) which was participated by different DA regional office employees in the country through setting up an exhibit booth to showcase different rice product produced in different regions.

Agriculture Undersecretary Emerson Palad, who led the ribbon cutting before the fair opens, said that the event is part of the government’s educational campaign in encouraging everyone to value more the country’s staple food as well as the farmers.

He emphasized that a study shows that every Filipino wastes about 2 tablespoons of cooked rice daily and in 2010, this was equivalent to P6.2B which could have fed about 2.6 million Filipinos and advocacy is needed so that everybody should be responsible in consuming rice.

Aside from various exhibits showcasing the different variety of rice like brown rice, black rice, red rice and adlai, there were also fun filled games, cook fest which demonstrated variety of recipes of brown or pinawa rice, storytelling and concerts from the popular bands in the country and rising TV personalities who addressed about rice sufficiency, rice wastage and better health through rice, which is the primary message of the event.

The winners for booth exhibit was announced after the program with Cordillera region as the champion, followed by Davao region, and Bicol region. (Aggie Media Service) 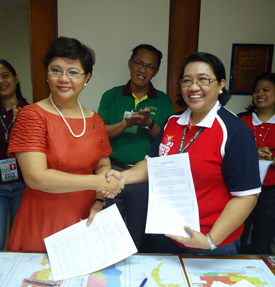 DA partners with UPMin. Department of Agriculture (DA) 11 Regional Director Remelyn R. Recoter (R) and University of the Philippines- Mindanao (UPMin) Chancellor, Professor Sylvia B. Concepcion show the signed Memorandum of Agreement on a project entitled “Mindanao Cattle Research and Development Project”. DA 11 will transfer a total amount of P 1,342,450  for the genetic improvement of our native cattle. Behind them are UP Professor Antonio R. Obsioma, the project leader (in green shirt) and other DA officials. (Aggie Media Service)

A total of 462 farmers in Davao region have graduated from Department of Agriculture’s (DA) School-on-the-air (SOA) on rice production, the organic way.

The Department of Agriculture 11 joined brown rice day by giving brown rice to all cafeteria within each vicinity recently.