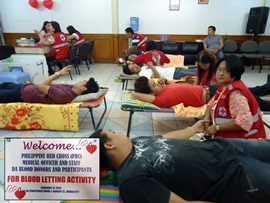 YUMMY YAM. Piles of the most expensive root crop, yam or ube being  displayed inside the postharvest facility funded by Department of Agriculture –HVCDP XI, during the harvest festival conducted recently in GK San Antonio, Catigan, Toril, Davao City.

DA XI was one of the 32 active Regional Line Agencies (RLAs) that participated in the 2013 Serbisyo Caravan in the municipality of Don Marcellino, Davao del Sur. This activity was spearheaded by ARENA-XI (Association of Regional Executives of National Agencies) which aims to bring the services of government closer to the people. DA has provided agri services and turned over inputs to the MLGU thru Mayor John Harvey Johnson amounting to more than Php 600,000,00 namely: 1000 pcs assorted Cacao/Coffee/Fruit seedlings; 2 hand tractors; 400 bags black rice seeds; 50 bags OPV corn seed ; 3 units knapsack sprayers; 320 vermicast; antibiotics/vaccines for livestock; and forage and pasture seed, among others.

To increase awareness among mall-goers on how to be responsible rice consumers, an event dubbed as “CelebRICE: RICEponsable AKO Fair!” was spearheaded by the Department of Agriculture (DA) held at Trinoma Activity Center, Quezon City recently.

Hosted by DA’s Philippine Rice Research Institute (PhilRice), the event is aligned with the celebration of 2013 as the National Year of Rice (NYR) which was participated by different DA regional office employees in the country through setting up an exhibit booth to showcase different rice product produced in different regions.

Agriculture Undersecretary Emerson Palad, who led the ribbon cutting before the fair opens, said that the event is part of the government’s educational campaign in encouraging everyone to value more the country’s staple food as well as the farmers.

He emphasized that a study shows that every Filipino wastes about 2 tablespoons of cooked rice daily and in 2010, this was equivalent to P6.2B which could have fed about 2.6 million Filipinos and advocacy is needed so that everybody should be responsible in consuming rice.

Aside from various exhibits showcasing the different variety of rice like brown rice, black rice, red rice and adlai, there were also fun filled games, cook fest which demonstrated variety of recipes of brown or pinawa rice, storytelling and concerts from the popular bands in the country and rising TV personalities who addressed about rice sufficiency, rice wastage and better health through rice, which is the primary message of the event.

The winners for booth exhibit was announced after the program with Cordillera region as the champion, followed by Davao region, and Bicol region. (Aggie Media Service)